Dragline made by Uralmashplant beats the record at SUEK mine 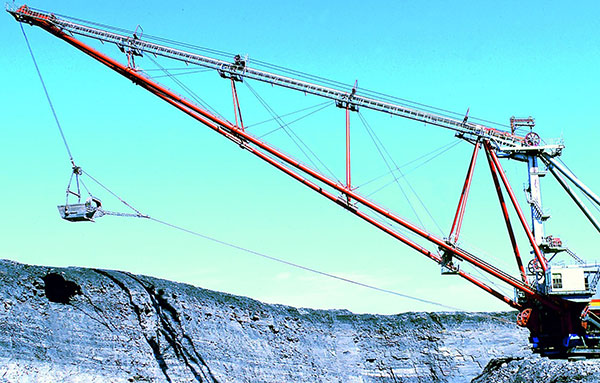 The crew of operators of a walking dragline ESH 20/90 working at the open-cast mine Razrez Nazarovskiy (owned by SUEK company) achieved a record output at the year-end 2019 by loading 6 million 220 thousand cubic meters of overburden. According to the company data this is the maximum result for such type of machinery.

The year's record is achieved by the crew led by Sergey Mozhgin during the competition between machine crews conducted by SUEK in its facilities in the year 2019. According to the company spokesperson this result was achieved due to the high professional skills of the machine crew that regularly overfulfills production plans and perfect technical condition of the dragline.

The machine on which the record at the Razrez Nazarovskiy mine was achieved was commissioned nearly 34 years ago. In total, two machines of this model were supplied to the company.

The walking dragline model ESH (with the bucket capacity of 20 cub. meters and 90 meter-long boom) is made by Uralmashplant since 1981.  As of today, the total quantity of commissioned ESH 20/90 machines is 65 units. These draglines are used by mining companies in Russia, India, Mongolia, Kazakhstan, Estonia, and Ukraine.

SUEK is one of the world's leading coal-mining company, the largest Russian coal producer for import and export supplies, and one of the leading Siberian heat and power suppliers.  Mining, processing, power-generating, transport, and service facilities of SUEK are located in 11 regions of Russia. There are more than 64000 employees working for the company. The main stockholder of the company is Andrey Melnichenko.