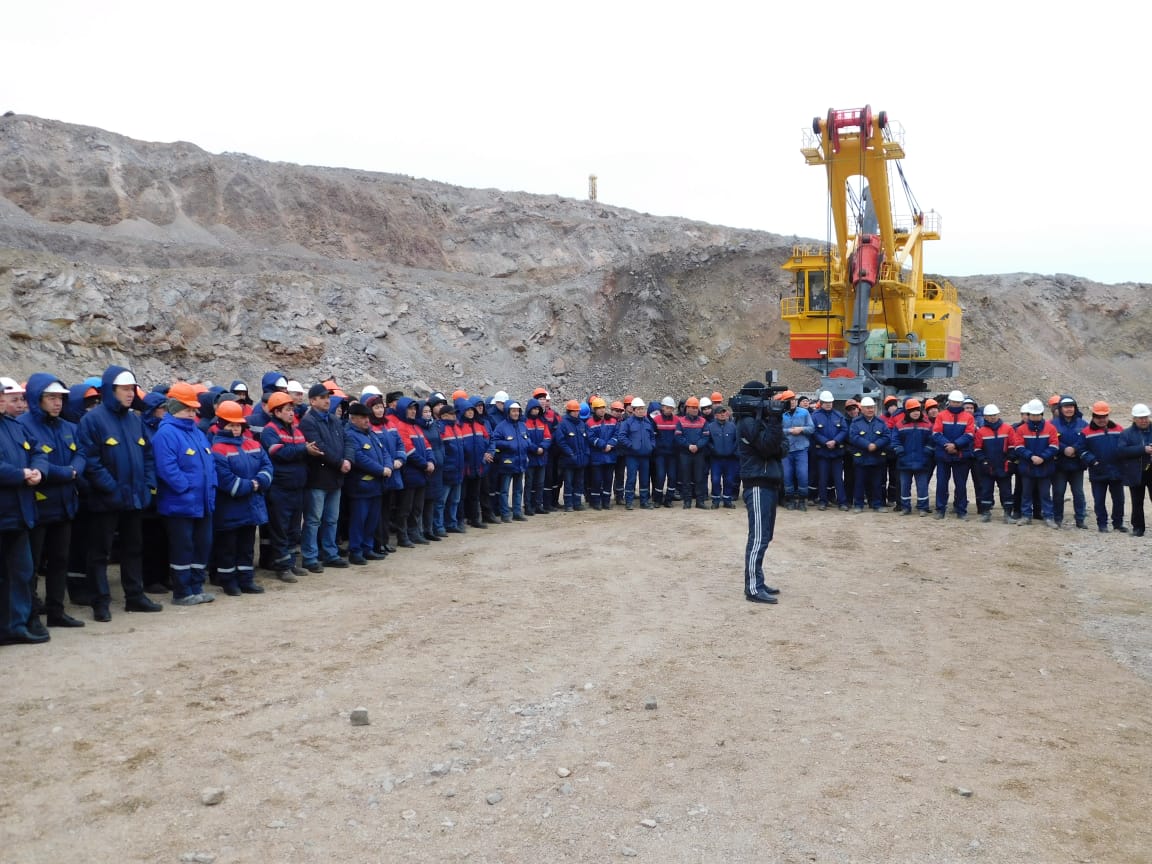 Karatau mining and processing complex (affiliate of Kazphosphate LLC, Kazakhstan) formally commissioned shovel EKG-10 manufactured by IZ-KARTEX (forms part of UZTM-KARTEX, saint-Petersburg). This machine is the fifth shovel acquired by Kazphosphate under its program of increase in output.

On Tuesday, 3 March, the formal ceremony of commissioning of EKG-10 mounted at the end of this February took place at the production site of Kok-Su field developed by MPC Karatau.

The general director of Kazphosphate LLC Mukash Iskandirov said in his opening speech that any commissioning of new machinery is an important event for the company. "We are facing an ambitious task – we have to double the output of phosphate fertilizers up to 1 million tonnes per year during two years. That is why we need more new powerful high-performance equipment," the head of Kazphosphate said. According to the company data, the investments made in the upgrade of the production facilities of MPC Karatau in the past year amounted to KZT6,493.2 million, that is twice as much compared to 2018. The output of ore grew by 13 % (up to 1,649.6 thousand tonnes).

According to the deputy production director of MPC Karatau Kuanysh Abishev, the performance specifications of the shovels produced by IZ-KARTEX fully satisfy the needs of the mining and processing complex. "The modern shovels EKG-10 combine the best traditions of the Soviet excavating machine building and innovative technologies. The operation of the shovels supplied by IZ-KARTEX demonstrated their reliability; the machines show high performance in harsh mining-and-geological conditions, in a wide range of temperatures (from –40°C in winter to +45°C in summer) when excavating rocks of various hardness. That is why upon examining offers submitted by all foreign suppliers, we opted for the shovels of the Saint-Petersburg manufacturer," Kuanysh Abishev says.

The commercial director of UZTM-KARTEX Andrey Ganin thanked the management of Kazphosphate for the confidence and said that the company, which includes the major Russian suppliers of mining equipment, is willing to continue to assist Kazphosphate with the implementation of its growth projects by supplying modern equipment to the company enterprises, including mining shovels, crushing and grinding facilities, drilling rigs. "At the stage of machinery design, we take into account all desires of our customers, specifics of production sites, and business challenges the companies have to solve using our equipment," Andrey Ganin said.

The enterprises of UZTM-KARTEX – "Uralmashplant" JSC and IZ-KARTEX LLC named after P.G. Korobkov – traditionally provide the mining facilities of Kazakhstan with excavating, crushing and grinding equipment. At present, the mining enterprises of Kazakhstan operate over 500 mining shovels of various sizes and modifications produced by UZTM and IZ-KARTEX; many of them are in service over 25 years. The service duration of crushing and grinding facilities at some factories exceeds 40 years.

Kazphosphate LLC is the leader in output of rock phosphate and production of phosphorus-containing materials among enterprises of Kazakhstan and CIS countries. The company was founded on 27 October 1999 on the basis of Karatau production association of the Kazakh Soviet Socialist Republic; it developed the deposits of one of the world's largest Karatau phosphorite basin. Kazphosphate incorporates enterprises, which create a full business cycle – from mining of phosphates to output of final product (yellow phosphorus and its derivatives, phosphate fertilizers and feed phosphates, industrial products made of mineral raw materials). Kazphosphate supplies its products to the markets of East and West Europe, CIS countries, China, and to the domestic market.